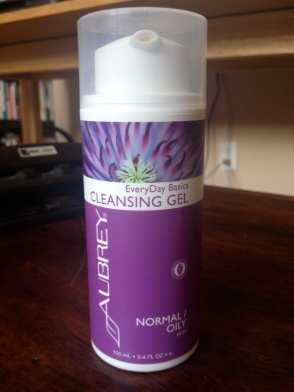 According to Aubrey Organics, this “refreshing daily cleanser clears away makeup, excess oils and impurities to leave skin soft, rebalanced and healthy looking”. It is a clear gel with a menthol/minty scent. Organic aloe vera “hydrates and soothes skin”, organic eucalyptus, camphor, and menthol oils “cool and tone”, and organic quinoa protein “balances oils and promotes skin health”. This product is vegan and gluten-free.

This product literally lives up to every claim it gives. And then it goes and does more. When I use this, my skin is left clean (evidenced by the amount of dirt my toner removes afterwards compared to how much it removes when I don’t use it) and my t-zone not oily, but it doesn’t feel stripped or tight at all. It deals wonderfully with breakouts as well, whenever I am breaking out I will use this and the zits will be gone or almost gone within a few days. Immediately afterwards, they will look less red. I’m pretty sure something in the eucalyptus/camphor/menthol cocktail is antiseptic and anti-inflammatory, but I am not completely sure. In any case, it works.

The product does have an amazing cooling property that makes my face feel more tight. Not in the way that skin gets when it’s dry, but in the way that puffy, tired skin feels de-puffed and awake again. My pores also look considerably smaller, redness reduced, and skin overall brightened. Speaking of redness- I use this after waxing my upper lip and this really takes down a lot of the redness and irritation. The actual skin texture is also much improved, almost like there is a a gentle chemical exfoliant in the gel. It really works wonders if you have one of those days when your face refuses to work with you, and just looks terrible. PMS face, for example. In addition to making your skin feel better, it will also instantly perk you up which is a good addition.

Though it says you can use it every day, I typically don’t. This is partially because my skin is not usually very oily or break-out prone, and partly because I’m lazy and I forget. I use this around 2-4 times a week, and I use it almost as a quick mask, leaving it on for 1-3 minutes. This usually happens in the shower after I put conditioner in my hair and before rinse my conditioner out. If I wake up and my skin looks gross, I’ll also use it quickly then, but not as a mask.

I have to say the packaging makes it easy to apply because the gel is pretty liquidey, but I think there might be some problems getting the last of the product out which is a bit annoying.

I will say, though, that the label normal/oily is accurate. Sometimes I get a combination deal where my t-zone is oily yet I’ve got random dry patches on my cheeks. Using this product doesn’t aggravate my dry patches unnecessarily, but I do definitely need a good moisturizer afterwards. So basically if this extreme combination situation sounds like you, this will still work but just make sure you’re moisturizing well. If you’re dry, I wouldn’t really recommend this.

Overall this makes my skin look amazing and is a real life-saver on those days when your skin looks dull and/or puffy. If you have normal/oily skin I would highly, highly recommend it. 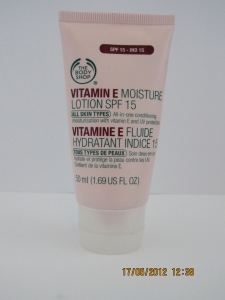 The Body Shop describes this cream as a light, easily absorbed moisturizing cream with an “SPF 15 for UVA and UVB protection” that “leaves the skin soft and healthy looking”. It is formulated with Vitamin E, community fair-trade sesame seed oil, and wheatgerm oil. Suitable for all skin types.

First of all let me say how nice it is to be able to get a hold of a day cream that has UVA protection. It is really great that I don’t have to go through all the hassle of hunting down a separate sunscreen, then after slathering it on, becoming super paranoid as to whether it will break me out or not. So kudos to you, Body Shop.

The formula is relatively light and feels very nice on the skin. It does sink in pretty quickly, but until it has done so completely, it leaves a slight greasy residue. The residue goes away pretty quickly, leaving the skin very smooth and hydrated, but that still is an iffy point for me. Despite the residue, the texture is still such that it allows for mixing with foundation to create a tinted moisturizer, which is definitely a plus.

Speaking of hydration, this cream is a very, VERY hydrating one. Before I started using it, I had a couple of dry patches on my cheeks. Afterwards? Nada. My face was nice and smooth. On the other hand, it didn’t make me break out on my forehead, where I typically get very oily. This leaves me to believe that the claim that it is suitable for all skin types is a relevant one, and that is something that my finicky combination skin greatly appreciates.

Although one of the things that makes this product good in my books is the fact that it can be substituted for sunscreen, one of the things that I do not like about it is that in some ways, it is too much like sunscreen in that it smells like it. Though sunscreen is very good and I am glad that it was invented, I am not terribly keen on the smell. And having that in a moisturizer is not really something that I enjoy. The smell wears off after a while, so it’s not so bad, but for me it is definitely a weak point in an otherwise good moisturizer.

The packaging is also pretty good in my books, as it is a squeezy tube rather than a tub. I prefer squeezy tubes because they are more hygienic as you do are not repeatedly dipping your fingers into the same product. In addition, it is better for creating DIY tinted moisturizers, as the product comes out it a specific place so the whole back of your hand isn’t covered with cream. Unfortunately, there is always the hassle of having to cut the top portion off to access the cream when the product starts to run out.

Overall, this is a pretty good product, especially due to its moisturizing properties and SPF (with UVA!). One of its greatest bonuses, though, is that it is so versatile in terms of skin type, so if you are someone whose skin is either really dry and really oily at the same time, or whose skin type varies drastically from one time to another, this cream should be able to keep up. The smell and slight residue do provide a slight irritation, but probably would not keep me from repurchasing the product. And hey, some people seemed to even like the smell! 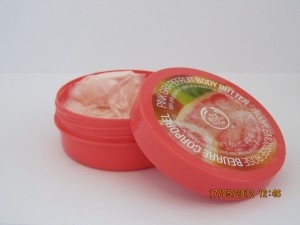 The Pink Grapefruit Body Butter is described as a creamy lotion for the body that sinks in quickly, making the skin feel hydrated and soft for up to 24 hours. According to the Body Shop, it is intended for normal skin

The texture of the cream is reasonably thick, but honestly this does not seem to help. The body butter was not, unfortunately, as hydrating as it claimed. It did provide some moisture, but did not condition my normal-to-dry body as much as it should have. The effects certainly did not last for 24 hours, as the next day around the same time; my legs were back to how they were the day before. The cream also did not sink in as quickly as I would have liked, and left an ever-so-slight residue.

However, I must say that the Body Shop hit the nail right on the head in terms of scent. This lotion smells divine. It is a nice refreshing, zingy scent, exactly like pink grapefruit. It’s funny, because sometimes, like with the Mango Body Butter, the body butters do not really smell like the fruit that they are supposed to (although they do usually smell nice nonetheless).

There’s not very much to say about the packaging, it’s pretty standard: a round tub with a screw top. It does its job just fine. One thing I do like, though, is its color. It is a lovely shade of pink.

This body butter is a bit of a trade off: the lotion is fairly mediocre, but the smell is lovely. If my skin weren’t on the drier side, I would definitely consider getting it just for the smell. Consider it a body spray in lotion form, with a little bit of moisturizing properties. Actually, you could just apply it over an unscented moisturizer that actually hydrates the skin, and get a satisfactory outcome. Not ideal though, and perhaps not worth the effort.